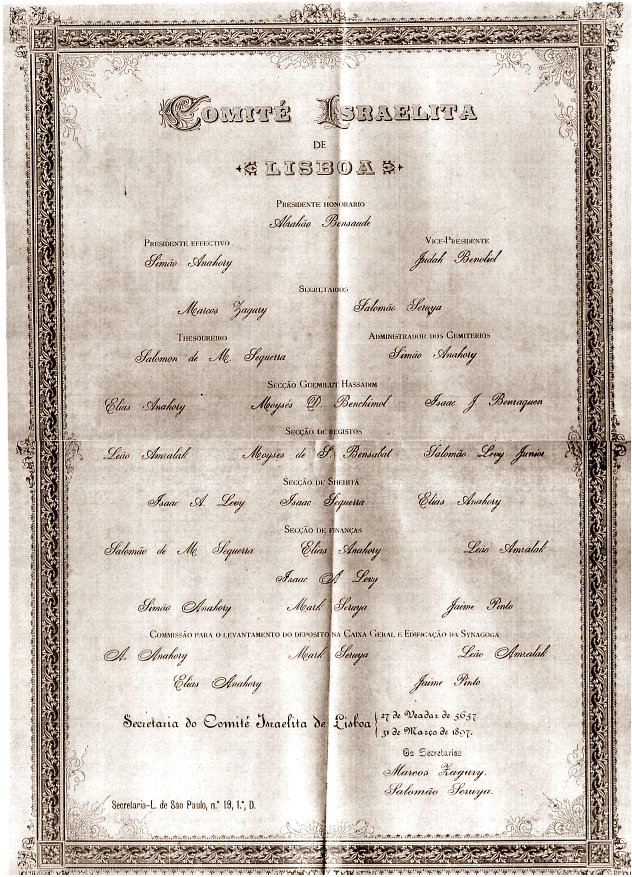 The birth of the Israeli Community of Lisbon

The present Jewish Community of Lisbon originated in the Sephardic Jewish Groups that have settled in Portugal in the early XIX Century. They were mainly tradesmen, coming from Gibraltar and Morocco (Tangier, Tetouan and Mogador) and some of their names still expressed a connection to their Iberic lands of origin, before the period they were expelled from there. That is the case of CONQUI (from Cuenca, province of Cuenca) or CARDOSO (from Cardoso, Viseu District).

They were above average-learned people, knowing how to read and write and speaking, besides the liturgical Hebrew, the Arabic or English and Haquitia, a Jewish-Hispanic-Moroccan dialect. They had numerous international contacts, not only due to their trading activities but also to their family ties spread around the world. These factors explain the quick economic and cultural flourishing not only of Lisbon Jews but also of the groups that have been settling on the first half of the XIX Century in the Azores and in Faro.

Parallel to their fast and successful integration in the Portuguese way of life, the first Jewish groups have sought to organize themselves as such, creating prayer lounges and acquiring plots to bury their dead loved ones according to the Jewish Ritual. The first grave belongs to José Amzalak, departed in February 26th 1804 and buried in a plot belonging to the English Cemetery of Estrela, definitely due to the British nationality of the first Jews in Lisbon, that came, as we have seen, from Gibraltar.

By this time, Jews were still considered as a foreign colony and the community had no legal existence yet. The Constitutional Charter of 1826 only recognized Catholicism as the sole religion allowed to Portuguese citizens, referring all the other creeds to foreigners. That is why back then it was called the Israeli “colony”, just like the English or German colonies were.

Since legalization of the community was not possible to get, Jews in Lisbon, especially in the second half of the XIX Century, decided to create charity institutions in the form of autonomous associations, which statutes were submitted for approval to the Civil Government or in the form of private foundations, usually managed by Ladies. These institutions have played a key role in the unity and organization of Portuguese Judaism. We will mention only three:

Somej-Nophlim (Protection to the Poor): created in 1865 by Simão Anahory with the aim to help the poor. Later, in 1916, this association opens the Israeli Hospital that played an important role in supporting Israeli refugees during the Second World War.

Guemilut Hassadim: founded in 1892 by Moses Anahory to minister spiritual aid and deal with the Jewish burials.

Economic Kitchen: founded in 1899, it played, like the Israeli Hospital, an important role during the World War II.

Another decisive step to the formation of the present Jewish Community of Lisbon is taken in 1894 with the achievement of a General Assembly of Jews in Lisbon with the aim of unify the Shehitá services (ritual slaughter and provision of kosher meat). Under the push of Isaac Levy and Simão Anahory, in 1897, a process that leads to the creation of an organizing committee to build a unique synagogue and the election of the I Committee of the Israeli Community in Lisbon begins, having Abraham Bensaúde as its Honorary President and Simão Anahory as the Effective President.

Since 1810 there were several prayer houses in Lisbon, but they hardly had the required conditions to the worship service, since they were located on humble apartments. Nevertheless, despite the difficulties caused by the lack of official recognition, the community manages to buy, under the name of private individuals, a ground for the construction of a new building, proper and decent.

The authorship of the synagogue’s project belonged to one of the greatest architects of that time, Miguel Ventura Terra. Located at nr 59 of Rua Alexandre Herculano, it had to be built inside a walled yard, since it was not allowed to build the façade facing the public street as it was not a Catholic temple, faith which was the official State religion at the time.

The First Stone being layed in 1902, the Shaaré-Tikva Synagogue is finally inaugurated in 1904, ending a more than 50 years’ effort from the Jews in Lisbon.

Official recognition of the Community

The first step to the official recognition of Israeli Community of Lisbon dates from 1868, when the Government grants a Permit, through a Charter from King D. Luís that gives “Jews from Lisbon the permission to establish a cemetery to bury their co-religionists”. This is the old Calçada das Lages Cemetery, presently known as Afonso III Cemetery, which is still an active cemetery to this day.

This Royal diploma has a true historical importance, since it is an implicit, though non-formal, acknowledgement of the Israeli Community of Lisbon. Actually, this one will only be officially recognized by the Republican Government in 1912, precisely 416 years after the Edict of Expulsion and almost a century after the Inquisition’s extinction.

The official recognition of the community and construction of the synagogue gave a new boost to the community’s life in Lisbon. Thus, soon in 1912 the Hebrew Studies Association “Ubá le Zion” is created, whose great promoter was Adolfo Benarus, professor of the Faculty of Letters of Lisbon, writer and educator, founder of the Israeli School too, in 1929, school that once had nearly 100 students.

The creation of a bulletin, directed by Joseph Benoliel, a bond between the members of the community, the organization of a Library in 1915 and the foundation of the Hehaver Israeli Youth Association in 1925 were other mark stones of the Israeli Community of Lisbon’s consolidation.

Yet, from that time on, the community will experience, as a result of the European events, a deep change both in terms of its action and of its composition. The anti-Semitic persecutions in the east and the fast rise of Nazism in Germany lead to the arrival into Portugal of the first Ashkenazi Jews that quickly adapt to the Portuguese society and the Israeli Community. The outbreak of World War II, the neutrality policy to which Portugal referred to in the framework of the alliance with England and the granting of transit visas to nearly one hundred thousand refugees originated an influx of tens of thousands of Jews to Portugal. The few who stayed changed the mostly Sephardic proportions of the Lisbon community.

Portuguese Jews played an important role during this period in supporting these refugees, first through the creation of the “Portuguese Commission for Assistance to the Refugee-Jews in Portugal” (COMASSIS) directed by Augusto Esaguy, and later straightly led through the Community's own refugee-support section, chaired by Moisés Amzalak and whose great animator was Elias Baruel. Funded by Joint and other international Jewish institutions, the community kept the Economic Kitchen and the Israeli Hospital, providing daily meals, clothes and healthcare to refugees.

Until the 60s the community has remained demographically stable, but the creation of the State of Israel and the outbreak of the Colonial War led to the departure of some families. Today, though decreased in number and tending towards a progressive assimilation, the community maintains its essential services running: Synagogue, Cemetery, Social Center and the Somej Nophlim Charitable Association.

The political opening corresponding to the post-revolution of April and the opening of Portuguese borders after Portugal joined the European Union has brought to our country Jewish citizens originating from various countries, from Europe and Brazil. These arrivals, if they keep on accelerating, may give a new layout to the Jewish community in Portugal. 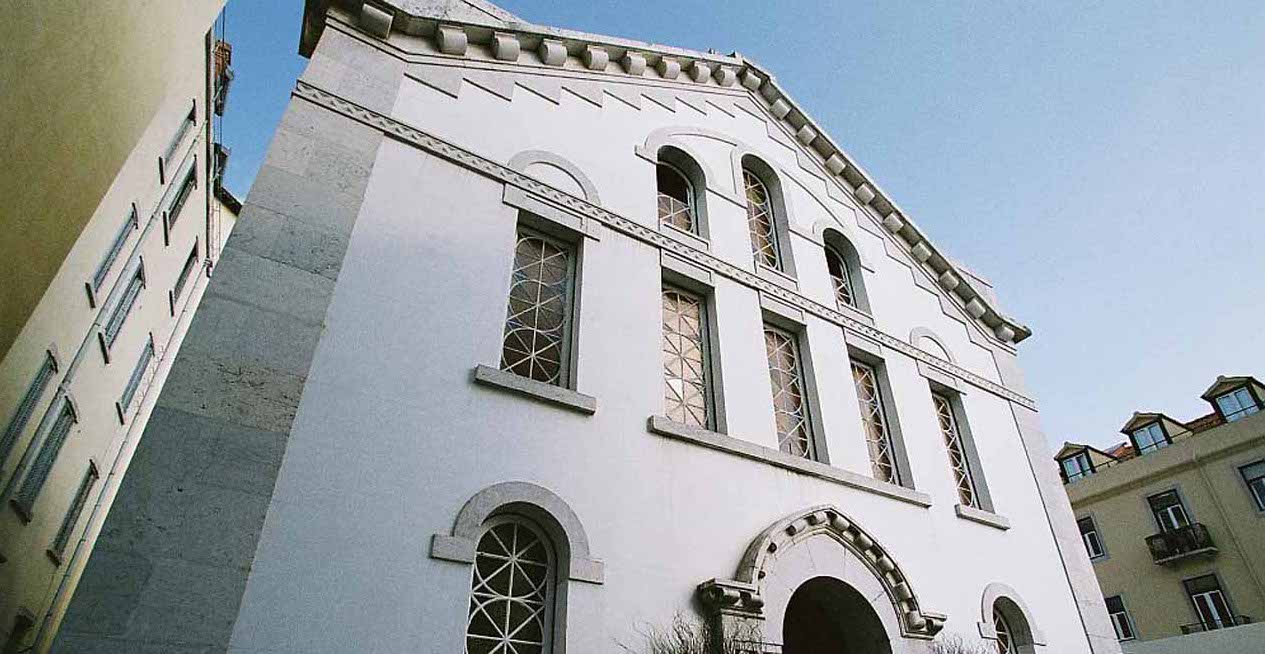 CURRENT BOARD OF DIRECTORS