Only our members, co-religionists and visitors with buried loved ones are allowed to visit

In 1868, the Royal Permit from King D. Luís acknowledged “Jews from Lisbon the permission to establish a cemetery to bury and honor their co-religionists”. This is the Calçada das Lages Cemetery (presently known as Afonso III Cemetery), which is to this day an active cemetery and the main one of the Israeli Community of Lisbon. This Royal diploma has an historical importance, since it is an implicit, though non-formal, acknowledgement of the Israeli Community of Lisbon.

In 1892, the Civil Government License ratify the Statutes of the “Guemilut Hassadim Association, an Israeli brotherhood of mutual aid in extreme time and funerals”. It was created by Moses Anahory to ministering spiritual help, arrange burials, manage the two cemeteries (Rua Nova à Estrela and Calçada das Lages, today known as Av. Afonso III), and the death records. 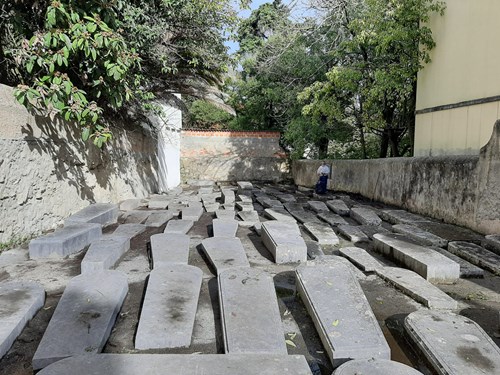 In 1801, the community got a small land plot, in the English Cemetery of Estrela, to bury their dead loved ones according to the Jewish ritual. The first grave there belongs to José Amzalaga, departed in February 26th 1804, according to the engraved epitaph. Jews from Lisbon were buried there until 1865.